Signs and Symbols of our Parish

St. John the Baptist Church is built in the shape of a fortress with the interior walls depicting a fort. The windows are of red glass representing the Spirit. Seven large square windows represent the seven sacraments, twelve small square windows represent the twelve apostles. There are five square windows representing the five major prophets and the five Books of Moses and four small rectangle windows representing the four evangelists. The ceiling is wavy, recalling the Sea of Galilee that Jesus calmed and the sanctuary ceiling is reminiscent of the brow of a boat. The turbulence of the sea diminished as one moves closer to the brow of the boat. The bronze crucifix was purchased by the youth of the parish in 1970. The statue of Mary, a wood carving, was purchased from Italy. The coloured glass window over the church entrance tells the story of creation. The concrete statue of Mary outside of St. John’s Church originally stood in a grotto up the hill from Hardin Street. It was moved to its present location in 1970. It has been painted a sandstone colour to match the brick at St. John’s Church.

The Statue of the Risen Christ and the baptism font at St. Paul’s were a gift of Fr. Victor Bureau a priest of this diocese and currently a Carmelite monk in Quebec. The statue of Mary was carved by Al Gerritson of Calgary for the Marian Year (1987).

The stations of the cross in the mission churches of St. Gabriel in Janvier and St. Vincent in Conklin were painted by Fr. Patrice Mercredi. He was a native priest born in Fort Chipewyan, who served the people from Fort Chipewyan to Lac La Biche. Fr. Patrick Mercredi Community High School was named after him and was dedicated on November 1, 1982, the day after Fr. Mercredi died. In Fort MacKay, the statues and crucifix have been repainted to reflect aboriginal rather than European art. Several years ago, some students painted a native mural for the church and a stretched deer hide has the names of all the deceased from the mission since its beginnings in 1948.

To begin the Great Jubilee in 2000, a Holy Year Door was erected at each church. The inscription at St. John’s Church reads: “Go and Make Disciples of All Nations”.  The door was blessed at the Christmas Eve Liturgy, marking the beginning of the Holy Year, two thousand years since the birth of Jesus.

When Fr. Alexandre Taché, omi, future Archbishop of St. Boniface, went to Fort Chipewyan in 1847, he was the first Roman Catholic priest to travel in the Fort McMurray area. Coming over the famous Methye Portage, he was the forerunner of many Oblate Missionaries who would go through Fort McMurray on their way in and out of the North.

It was in 1853 that visiting missionaries from Fort Chipewyan started to serve the Catholics in this region: Cree and Chipewyan, Métis and others. Travel was by dog team and snow shoes in winter and York boat and canoe in the summer until 1884 when steamboats began to navigate the Athabasca River. Fr. L. Croisé, omi established a permanent mission in Fort MacKay in 1904 and visited Fort McMurray regularly until 1911 when the decision was made to build a mission chapel in Fort McMurray.

In 1914, a two storey log mission chapel with a seating capacity of 100 was built, a replica of the Fort MacKay mission building. The lower floor was used as the chapel, the upper floor for the missionary’s living quarters. The young parish adopted St. John the Baptist as their patron saint because of their desire to imitate St. John the Baptist in being a “herald of Christ.” Fr. Adolphe Laffont, omi was the first residing priest, from 1914 to 1929. In 1914, there were twenty-one baptisms, five marriages and one funeral.

The first church built in 1914

By 1925 the railroad was laid between Edmonton and Waterways (Hangingstone) and industry was being established in Fort McMurray. With the increased population, a second church was built, It was blessed on June 24, 1926 on the feast of St. John the Baptist. This church building burned down on February 19, 1939 because of a defective chimney. A warehouse was then transformed into a makeshift church building until a new church was built.

The second church built in 1940

Preparations began for a new building in 1949, and in June 1951 it was blessed and officially opened. Increased population in the early 1960’s prompted the need for a new and larger church building. A Parish Council was organized in 1967. After the Bishop’s approval, plans for a new church were submitted and studied in 1968. In July 1969, work on the proposed church on Hospital Street was launched. The first mass was celebrated on March 22, 1970 and the church was blessed and officially opened by Bishop Paul Piché omi on June 7, 1970. 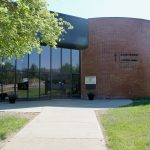 For several years the population had increased. To accommodate the numbers, Sunday Mass was celebrated in several schools. The need for a second church in Fort McMurray resulted in the building of St. Paul’s in Thickwood. St. Paul’s was officially opened and blessed by Bishop Raymond Roy on November 23, 1980. Even though a second church was built, the parish continued to function as one parish. In 1981 the parish team began to take on a new shape. It included two Oblate Fathers, an Oblate Brother, a diocesan priest, and two sisters. Sister Mary Phillips, a Sister of Service, remained with the parish team until 1992. In 1984 and 1985, with the retirement of Fr. Georges Bégin omi and the transfer of Fr. André Brault omi to a more northerly mission, the pastoral responsibility for the missions of Fort MacKay, Janvier and Conklin was given to this parish. In the mid 1980’s, when the Oblate Community began to reassess their focus, they decided to withdraw from some parishes to maintain their missionary charism. Fr. George Lagrange, omi was the last of the Oblate Fathers to serve in Fort McMurray when he was transferred to Fort Simpson in 1987.

Since 1988 the structure of Parish team has slowly changed. The Pastoral responsibilities includes the City of Fort McMurray with two churches: St. John the Baptist and St. Paul, the communities of St. Gabriel in Janvier, St. Vincent Ferrier in Conklin, and St. Julien in Fort MacKay and the occasional service in Anzac. With yet another growth spurt in the population, discussions and planning is underway to build a much larger facility to meet our increased pastoral challenges. Speculation concerning the community of Fort Chipewyan, currently in the Diocese of MacKenzie-Fort Smith, to be included in the pastoral responsibilities of St. John the Baptist Parish in Fort McMurray, has increased in recent years. As of September 2006, it was added to our parish responsibilities. The formal transfer of Fort Chipewyan to the Diocese of St. Paul occurred in December 2012. In August of 2013 St. Paul’s Church was incorporated into its own Parish.

Fr. Gerard Gauthier served as Pastor of our Parish from 1991 to Sept 2009. He was born and raised in rural Boyle, Alberta. Fr. Gerard was ordained in the Diocese in 1982.  Fr. Paul Thekkanath served our parish from September 2009- August 2013. Fr. Jose Chirppanath was the pastor from August 2013- August 2015.  Fr. Andrew Schoenberger was appointed Pastor of the parish in 2015 and served the parish until July 22nd 2019. Then Fr. Augustine Joseph CMI, his associate from 2016 June, took over from Fr. Andrew in 2019 and is now the Pastor of the parish.

In 1937 a hospital was begun and inaugurated on May 28, 1938 by Bishop Gabriel Breynat, omi. Sister Nadeau sgm was the first Superior of the Grey Nuns. This hospital had 25 beds and 10 bassinets. The St. Gabriel Hospital operated for 22 years (1937-1959) without any government support. The hospital was closed in 1970 and the property sold in 1972.

The St. John’s School District was formed on January 1, 1936, including the settlements of Fort McMurray and Waterways. A loan of $5,600 from Bishop Gabriel Breynat, omi was made to the District for the erection and equipment of its first school. That year, the enrollment was 43 students. In 1950 two classrooms were added to St. John’s School to accommodate 107 students. Besides dedicated lay teachers, the Grey Nuns of Montreal provided two teachers from 1949 until their departure from Fort McMurray in 1972. The Sisters of St. Martha arrived in 1975 and spent 18 years teaching. Over the years, we have also had the Sisters of Service, the Sisters of Assumption and the Holy Cross Sisters providing teachers to the schools and a religious presence in the parish. Today, the Fort McMurray Catholic School District consists of ten Elementary Schools (K to 6) and two Junior Senior High Schools (7 to 12) with approximately 6000 students enrolled.  There is also a Catholic Francophone school, Ecole Boréal.